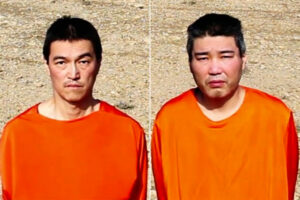 The images and audio purport to show the cold blooded execution of one of the Japanese hostages held by ISIS, after the deadline set by the extremists to pay ransom in exchange for the prisoners passed.

The video, which has not yet been independently verified, appears to show the surviving prisoner, Kenji Goto, handcuffed and wearing an orange jumpsuit, and holding a picture of what is claimed to be the lifeless body of the second hostage, Haruna Yukawa.

Japanese Prime Minister Shinzo Abe has released a statement branding the event as an ‘act of outrageous, unforgivable violence’, and has demanded the immediate release of the second hostage.

Some confusion remains about the authenticity of the video, as its format is not the usual utilized by ISIS. Officials both in Japan and elsewhere are attempting to verify the veracity and origin of the footage.

The video was released four days after ISIS issued a deadline for the payment of $200m in exchange for the prisoners’ lives.

During the video, a voice claims that ‘They (ISIS) no longer want money’. Instead, the voice demands the release of Sajida al-Rishawi, a woman arrested in Jordan back in 2005 on suspicion of attempting to participate in an attack in which others killed dozens at Jordanian hotels.