Boxing: Big news as Mayweather announces he will offer Manny Pacquiao a rematch after his shoulder surgery – TheLiberal.ie – Our News, Your Views 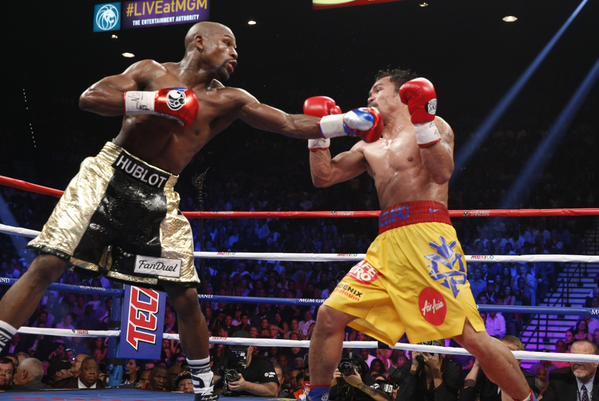 Boxing fans, are you sitting down? Have you a nice comfortable seat? Good because this is big!

Floyd “Money” Mayweather has just announced he will offer a rematch to the legendary Manny “Pacman” Pacquiao.

The two fought in a major ‘let down’ contest on Saturday night where Mayweather was the victor in a much less evenly battled fight than many were expecting. In a unanimous points decision, Mayweather was the clear winner. He won 10 out of the 12 rounds.

But after the 12th round bell had rung through, it quickly emerged that Pacquiao had fought the entire fight with a major shoulder injury. A torn muscle in his shoulder was deemed to be the case prior to the Las Vegas fight. Officials denied the man from the Philippines any kind of anti-inflammatory medication.

As a result, most commentators are deeming this fight to be a non-contest at worst, and unfair win at best. Mayweather for 60 hours after the fight declared he would vacate his titles and retire after his next fight.

He has now backtracked, presumably under pressure from the public, the press, Manny’s team and even his own team, to offer his rival another shot against him.

He has acknowledged that it’ll be at least 9 – 12 months away so that Manny has time to recover from his surgery, but he is willing to wait and with a purse of over €300 million in the first fight, it’s understandable to see why he’d like to dance with the Pacman once more.