Inspirational: Eimear Coughlan celebrates her baldness from cancer – TheLiberal.ie – Our News, Your Views 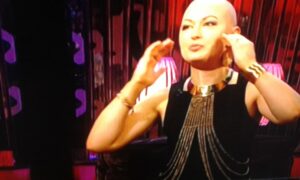 In an incredible interview on RTE’s Saturday Night Show, Cork’s Eimear Coughlan spoke about her positive spin on going bald from cancer.

She went into detail of how her illness gave her a much deeper faith in God and also all the amazing people she has met throughout her treatment. The Mallow lady said that she has managed to put a positive spin on her turmoil by believing it happened for a good reason and indeed she feels she’s now a most positive, happy and religious person.

In what only can be described as inspirational, Eimear and her best friend, Kirby, will be appearing on an advert on TV soon.

Eimear is now a style and fashion icon and she has managed to “rock various looks” that emphasize her eyes and bald head even more. Eimear’s husband had been by her side every step of her way.

Eimear has a blog which writes regularly about her experiences. It can be accessed here: http://aheadwithstyle.com