An Easter Monday to Remember – TheLiberal.ie – Our News, Your Views 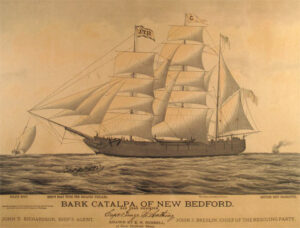 A noble whale ship and commander

They call the Catalpa they say

Sailed out to Western Australia

And took six poor Feinians away

And take care of the rest of your feinians

Or the Yankees will steal them away

Following the failure of the revolt of the United Irishmen in 1798, the Irish nationalist movement took two divergent paths.  Many flocked to the great orators of the time, men such as Dan O’Connell and John Stuart Parnell, and took the political path of elections, with the aim of obtaining Home Rule.  Many others, especially those who had experienced the 98, who had served during the Napoleonic Wars or who harboured a secret desire for armed rebellion,  chose to join the Feinians and plotted to liberate Ireland through military action.

As such, many Irishmen actually volunteered to join the British army and navy with a view to learn what was called, at the time, the arts of war.  Sadly, they were all too frequently caught out in their plotting, or, often,  revealed by their friends as Feinians.  The British, appalled by what they saw as treasonous behaviour, had a very special punishment reserved for these men, The Wild Geese as they were known.  It was transportation to the other end of the earth, as far from Ireland and England as anyone, in that day, could imagine. Transportation to the harshest of penal colonies, Fremantle in Western Australia, where the four fences to the prison were seen as the Indian Ocean on one side and the desert on the other.

The very last convict ship to journey to Australia, The Hougemont, was despatched to Fremantle, Australia in 1868, and on board were almost one hundred political prisoners,  including the last Feinians sentenced to transportation to Australia.   However, by 1874, all of the civilian Feinians had been released, and only 12 of the Irish prisoners remained in Fremantle Gaol, the 12 men who had been in the British military. Their files, of course, were stamped Not To Be Released.

An appeal was made by one of the imprisoned men, James Wilson, to a Feinian friend, John Devoy, who had taken up residence in the United States of America upon his release from Fremantle. In this sad letter he said, “mine is a voice from the tomb … for is this not a living tomb?”  John Devoy, moved by the letter immediately contacted his fellow Irishmen, and a daring rescues plot was hatched on the east coast of the USA to release the prisoners, half a world away in Western Australia.

They purchased a barque, named the Catalpa, disguised her as a whaling ship, hired an American crew and went aboard for what, at the time, was the trip of a lifetime: around the  bottom of South America over to Australia. Two agents, John Breslin and Thomas Desmond, were despatched to the Colony to make the preparations while they sailed the rescue ship south and west.

In 1874 The Catalpa arrived off Fremantle harbour… to be exact, it was Easter Monday, and the locals were gathered on the banks of the Swan River enjoyed the Annual Perth Regatta.  As it was believed to be virtually impossible to escape from Fremantle, the convicts, in a rare relaxation of their harsh regime, were also relaxing on the banks of the river.  Breslin then cut the telegraph wires connecting Fremantle with Government House in Perth,  while Desmond obtained two horse traps for the escape.  Only six of the twelve prisoners to be rescued were able to abscond to the traps, but one aboard the Irishmen drove at a furious pace the twenty miles south from Fremantle to Rockingham Pier, where a whale boat from the Catalpa was to take them to the main ship.

The British Authorities were soon aware of the escape, and, unable to telegraph Perth, took off in furious pursuit. Meanwhile a cannon was mounted on the coal steamer The Georgette and several Government cutters began scouring the coast for the escapees.  The escape party had only minutes to get the whale boat to sea, with the British in hot pursuit. Then disaster struck in the form of a fierce gale and rainstorm which dismasted the whale boat.  As The Catalpa disappeared into the fog and rain, it appeared yet another Irish Feinian plan was doomed to failure. However, the very storm which dismasted the whaler also saved the escape party, as the British were unable to find them! A long night in the rain ensued. This along with a reported refusal of many of the settlers to assist the authorities in their search.  Newspapers were to later report that many of the Australian settlers showed an awkward tendancy to support the escapees and not the authorities!

The next morning The Catalpa sailed to the rescue of the whale boat and hove to beyond the, then, international limit of three miles in order to prepare for the return voyage to New York.  At this time The Georgette, with her cannon and armed guards arrived and demanded the release of the prisoners.  After refusing to return the men,  Captain George Smith Anthony, an American, unfurled the Star Spangled Banner and announced that firing on him would be tantamount to firing on the United States of America.  Governor William Robinson, himself an Irishman, aboard The Georgette was,  after a brief stand off,  forced to concede that the men had, in fact, escaped and would never return.

The men, of course, were treated as heroes on their arrival in New York, and the local press, in Australia, was scathing of the British authorities.  I personally believe that the great escape was the final nail in the coffin of convict transportation to Australia.  And the song, partly given above, is a favourite of all folk singers and Irish visitors to Australia.

I hope you enjoyed our somewhat Boys Own adventure this week, and will write again, next week, on more of the many things which connect Eire and her southern colony, Australia. Until then, have a grand week and hope you all have a wonderful week.