Fans voice their disgust as woman appears to take players jersey off a young boy at League 1 play-off final – TheLiberal.ie – Our News, Your Views 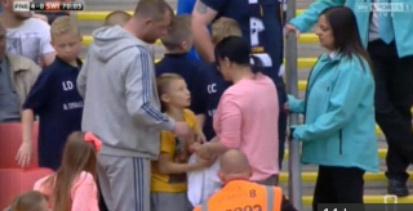 Social media websites have come a wash with compliants in the UK after supporters of League 1 play-off winners Preston North End have taken to Facebook and Twitter to vocice their disapproval of a female fan allegedly took a player’s shirt from a young boy in the crowd at Wembley Stadium.

The rather bizarre farce came about after hatrick hero Jermaine Beckford threw his jersey amongst the Preston North End faithful when being substituted. Many viewers watching the League One play-off final on Sunday saw a strange scene unfold in the stands afterwards. The jersey had seemingly caused a bit of scuffle between a group of young supporters who argued over the shirt, but eventually one young boy managed to claim it. People watching the match on Sky Sports then watched in disbelief as a nearby woman appeared to have  taken the shirt off the young boy for herself.

The incident has caused many fans to voice their discontent at the woman after she snatched the jersey from the young boy, however the outrage did not stop there as many fans took to social media site Twitter were they found that the shirt had then been put up for sale on Gumtree.
The woman in question a Mrs Timbrell, aged 31 has responded about the incident to Manchester Evening News saying she knows the family of the boy and is not at fault in any way. Mrs Timbrell told the paper: “People have made me out to be an absolute idiot,” she said. “I will be speaking to the family, I actually know them, they’re friends.” Timbrell also said: “My side of the story will soon come out”.

Meanwhile Preston North End FC have since said they will make sure the young boy is given another shirt if his family make contact with them.