Gay Marriage: The No side trumps the Yes camp in crucial Prime Time debate – TheLiberal.ie – Our News, Your Views 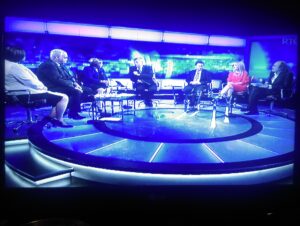 As the date of May 22 looms ever closer, the Yes and No sides were once again pitted against each other on national TV.

RTE’s Prime Time gave the opponents another chance to put forth their reasons and arguments for a Yes or No vote.

The No side was backed by John Waters Families First, David Quinn from the Iona Institute and Eileen King, from Mothers and Father’s matter.

The program began with soundbites by Government ministers; Joan Burton for instance is heard saying that a Yes vote would be profoundly good to our society.

Once the program got underway, David Quinn from the No side fired the opening salvo, explaining that Article 41 in the Constitution defines that family is the fundamental unit of society. He put forward that the Yes side says that there is no special value in having a mother and a father.

Francis Fitzgerald retorted, expressing that the institution of marriage has changed and evolved throughout the years, and the Government wishes to acknowledge the different circumstances for families and ensure they’re all equally protected, irrespective of their composition. According to her, each and every one of citizens are equal, and a Yes vote
would strengthen marriage, not weaken it.

The question of whether or not children would be better off with a mother and father, all things being equal, was put to her, and she said that she would not like to discriminate towards any family type.

Eileen King, from Mothers and fathers matter, postulated that man and woman have defined marriage for thousands of years, and that she believes it is of capital importance to support marriage as a gender institution. No State or religion defines marriage, man and woman do. If the Yes side were to win, women would be deemed dispensable to the
institution of marriage. She rightly questioned whether two men or two women would be the same.

Grainne Healy from Yes Equality said that people of same sex will get married if the option is there, and said that this has happened in other countries and the “sky hasn’t fallen in”. According to her, a Yes vote ensures Ireland is about equality and generosity. She later added that charities that work with children say that a Yes vote would be a “good thing” for all children.

John Waters, from First families first, then took a turn. He said that Article 40 in the Constitution deals with equality already. He said that the new wording suggested by the Yes side would endanger rights expressed in that article. If a new concept is introduced, it will disintegrate those rights. He put specific emphasis on the word “Natural”, as expressed in the Constitution, and said that the natural definition of marriage is the procreative nature of a man and a woman. A Yes win would destroy that natural order.

He also said that 230 gay couples are rearing children at the moment. He called for a No vote because the Yes vote would damage families in many ways. Biological rights would be nullified by Yes vote John Waters rightly pointed out that a Yes vote would mean a redefinition of families.

The debate was fairly heated at times, and the No side made for a much more passionate and strongly backed debate than their opponents, who went on with the official “equality” line set by the Government.

Once again, the No side did come out on top this time around.