Opinion: Clamping is simply a corrupt tax, nothing more-nothing less – TheLiberal.ie – Our News, Your Views 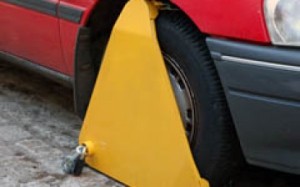 In this day and age, clamping has become a foregone conclusion for so-called “illegal parking”.

With that in mind, why has such an inconvenience become so acceptable? The answer: media brainwashing.

Even if there is talk about public clamping before replaced with fines, private companies will still have a field day. For the most part, people were initially against clamping, fearing that they themselves or their loved ones would inevitably end up in the compromised, time consuming position of being clamped. However, as clamping was rolled out in Dublin’s fair city, a successful media campaign endorsed an immoral penalty on hard working everyday Joe Soaps that became overall acceptable.

THE POLICE STATE GONE TOO FAR

The real agenda behind this bullying “illegal parking” practice, is that it’s just an inherent masked tax imposed on hard working decent people going about their daily business. Private clamping companies are disgusting. They savage on the vulnerabilities of drivers faithfulness. Who consciously leaves their parked expecting to be clamped? Nobody. Who deserves to be clamped for mistakenly parking on private property? Nobody.

There is a traffic problem, that’s blatant, but (excuse the pun) fines are fine! Hand out a fine, leave it on the windscreen and move on! Let the person get in their car and drive away. Let them go home with the baby, or go home and get their medication, or go and collect someone, or go make their appointment.

Far too many rules from the media-fed handbook are inflicted on society. Clamping has no place in society. From personal experience, the clientele the firms have working for them would quite frequently be better suited prison laundry rooms.

For people to condone these thug-like inconveniences, ask yourself this: Given Belfast can’t impose clamping (for obvious reasons), is their illegal parking problem worse than ours? Answer: No, they have strict fines which are just as annoying as the accompanied fine with clamping in the south – the difference is, the driver can still do just that… drive!