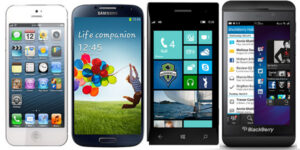 With the release date of the Samsung Galaxy S5 which we reviewed in part I now confirmed to be February 24th  we now take a look at what Apple’s response will now be with the Apple iphone 6. In this article we at the liberal.ie will be taking about what is rumoured to be in the Apple iphone 6.

With the iPhone 6 expected to be released this year. It is still unclear when the official date will be, although rumours suggest it will be in the third quarter of 2014.

According to Business Insider, of the many iPhone 6 prototypes Apple has made, one has a giant Retina+ IGZO display and a “new form factor with no home button. Gesture control is also possibly included.” It will surely include Apple’s new Touch ID finger print tech though?

The Retina+ Sharp IGZO display would have a 1080p Full HD resolution. It’s also been widely reported that Apple could introduce two handset sizes as it seeks to compete with the plethora of Android devices now on the market.

The same report suggests that Apple will release multiple handsets throughout the year over and above the iPhone 5S and 6. Although this is yet to be seen.

According to those within the tech world leaked Patents apparently show that Apple has been thinking about magical morphing technology that can hide sensors and even cameras.

Jefferies analyst Peter Misek also says he believes the new iPhone will have a bigger screen. Different sizes also seem rather likely to us – the word on the street after WWDC 2013 was that there would be 4.7 and 5.7-inch versions.

More rumors in September 2013 pointed to a 6-inch display, with further talk of a phablet sized 6-inch iPhone claiming it might arrive as early as May 2014.

It’s been suggested that there could even be three size variants of the new iPhone .They are called iPhone 6 Mini, iPhone 6 & iPhone 6 XL. However, different size variants aren’t exactly easy to just magic out of thin air.

You can expect more premium metal to come your way with the iPhone 6 too, and Apple patents for liquidmetal 3D printing suggest there may be a new way to form the sultry chassis on the new iPhone.

That chassis could well be the thinnest yet – with word that Apple will slim down the svelte 7.6mm 5S body for the iPhone 6, and if leaked images of the phone’s case are legit the handset may well be shockingly slender.

With a 128GB iPad, already available, what about 128GB iPhone 6? With Samsung already boasting with there vast amount of storage space apple could well rival them.

Not a huge surprise, this one: the next processor one will be a quad-core A8 or an evolved A7. The big sell here is more power with better efficiency, which should help battery life.

With sources saying Apple’s bought camera sensors from Sony, this year we’re going to see the same 8-megapixel unit. Although expect optical image stabilization and improved autofocus though and maybe a better flash.

One thing seems certain – Apple can’t ignore the massive movement towards eye-tracking tech from other vendors, especially Samsung. It seems a shoe-in that Apple will deliver some kind of motion tech within the next iPhone, probably from uMoove.

Could Apple help give it a push? CP Tech reports that Apple has filed a patent for efficient wireless charging, but then again Apple has filed patents for pretty much anything imaginable.

The tasty bit of this particular patent is that Apple’s tech wouldn’t just charge one device, but multiple ones. Here are more details on the iPhone 6 wireless charging patent.

Meanwhile, a further Apple patent seems to imply that future iPhones will be able to adjust volume as you move them away from your ear.

And could the iPhone 6 really have 3D? It’s unlikely, but the rumors keep on coming.