A Look At The Week’s Weather – TheLiberal.ie – Our News, Your Views 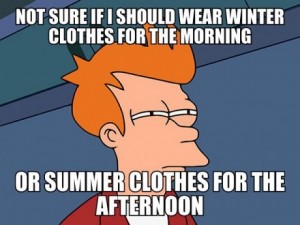 The summer is officially upon us but can we still afford to leave the house without a cardigan or an umbrella? According to Met Éireann we CAN!! well, now and then, occasionally, on the rare occasion.

Today is expected to stay bright and fresh with a few cloudy periods but mainly sunny. Most places will remain dry but light drizzle is expected to fall along the North coast. Temperatures in the low to mid teens, but possibly up to 17 or 18 C, in the sunny southeast. Northwesterly winds will be light to moderate.

Early Monday morning will be misty and cloudy with patches of drizzle and fog around the country. The second half of the day should be drier and brighter, with some sunny spells. Highs of 13 to 18 C, with moderate northwest winds – best weather is expected over south Leinster.

The week will begin mainly dry and settled due to high pressure to the west of the country, but rain will arrive early on Wednesday.

Tuesday is expected to be yet another dry and settled day with a mix of sunshine and cloud. Afternoon temperatures will climb to between 10 and 14 degrees in Ulster, Connacht and west Munster, but east Munster and Leinster will be milder with highs of 14 to 19 degrees. However expect a cool night on Tuesday with lows of 3 to 7 degrees.

Wednesday will begin dry but rain will fall later on in the day, and will continue overnight with some heavy falls expected. A fresher day with highs of 10 to 16 degrees, while temperatures at night will fall to between 5 and 8 degrees.

The heavy rain will fade on Thursday but the weather will become breezy and showery. The west to northwest winds will cool things down with highs of 10 to 14 degrees.

The rest of the week looks like being unsettled with spells of rain and temperatures will be quite low until the end of May (or until the leaving cert begins) with highs of 10 to 14 degrees.