Abortion In Ireland: Not So Much Debate, As Debacle – TheLiberal.ie – Our News, Your Views 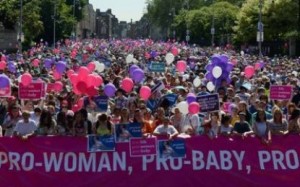 For anyone who followed the “debate” surrounding the Protection of Life During Pregnancy Act 2013, it will come as no surprise that the enactment provisions have been described as “very haphazard and unsatisfactory” by the College of Psychiatrists, who have taken the further step of advising its members not to participate in the reviews panels intended under the legislation to assess pregnant women expressing suicidal thoughts.

By mentioning its “extreme concern” that the legislation provides for no GP guidelines, the College has highlighted a number of flaws that exist under the legislation, but Minister Reilly has already brushed such concerns aside, insisting that this is a matter for the Medical Council.  When pressed on whether abortions could be carried out without the guidelines, his response was interesting:-

“You can.  Absolutely. Totally.  The most important thing you need is the panel of experts to review an appeal case.”

From the news, it seems that the College of Psychiatrists isn’t prepared to advise its own members to take the risk, and who can blame them?  During the discussions on the Bill last summer, the Government ignored the concerns of 113 psychiatrists who expressed serious concerns over advocating abortion as a treatment for suicide ideation on the grounds that it wasn’t supported by any medical evidence whatsoever.

They weren’t the only experts whose evidence was swept under the carpet.  When the Irish Medical Organisation rejected motions calling for the legalisation of abortion at their Conference, it didn’t make any difference to the Government’s plans.  Even the refusal of the Irish College of General Practitioners to support the Bill fell on deaf ears.  As the months progressed, it became abundantly clear that the Government was set on a course of action and the lack of any evidence to support their plan was not going to dissuade them.

It’s no surprise then, that the enactment of the law is proving so difficult.  The central tenet is faulty. There is no evidence anywhere in the world, that shows that an abortion is a suitable treatment for a pregnant woman.  By enacting this legislation, the Minister and his Government have set the psychiatric and medical profession in this country on a course of extreme professional error, not to mention endangering the lives and well-being of women and babies in Ireland.

This latest criticism of the Minister’s Act should cause us all to pause for thought.  Minister Reilly is still boasting about the fact that this Government wasn’t the seventh to leave the issue of abortion untouched. On that score, he is correct.  This Coalition has done far worse than that. They will be remembered for having introduced a piece of legislation in direct contravention of international medical and psychiatric evidence, and do not have the bravery to realise they were wrong.

But we shouldn’t be too surprised.  The Minister didn’t even have the courtesy to debate this Act in public; if he wasn’t prepared to defend it back then, what hope is there that he will accept his mistake now?

Better go back than go wrong, as the saying goes, but this Government is not for turning.  This Act, they say, will be last one when it comes to abortion.  “That’s the end of that”, Minister Reilly claims, echoing the desperation of the Taoiseach when he assured the electorate that he would “get rid of it” on that infamous night in July.

But the Irish electorate aren’t like that, and when the Minister talks about a commitment to legislate that has been fulfilled, he is only reminding them of the commitment that Fine Gael broke – a commitment to remain opposed to, and not to legislate for, abortion.  Irish pro-life voters will hold Fine Gael to that broken commitment.  They will not forget the betrayal of a Party on this most important issue of human life.  Just as they gave their votes to protect human life before the last election, they will withhold them from those politicians who have so arrogantly put those lives in jeopardy.

Minister Reilly may think he can rest easy with the belief that his part in this debacle is over, but it’s really just beginning.  And as the New Year arrives, the ballot boxes of 2016 come ever closer.

7 Comments on Abortion In Ireland: Not So Much Debate, As Debacle