Album released to raise funds for Drogheda Toddler, Alice Turner, who suffers from a rare cancer – TheLiberal.ie – Our News, Your Views

The A Chance for Alice campaign are thrilled to announce the release of an Album dedicated by top local artists entitled “Voices for Alice”. The album, which was spear headed by Alice’s uncle and A Chance for Alice Musical Events Manager, Matthew Turner, is the culmination of almost 8 months work which began back in March of this year.

Speaking about the album Matthew said, “I knew we had a really talented group of artists from the North East playing original songs all around Ireland and beyond. As soon as I mentioned the idea to a few, the enthusiasm and energy everyone showed towards the idea was amazing. All I asked was that their songs were original and that they would be proud for it to be on the album. The album has 15 tracksin total.” 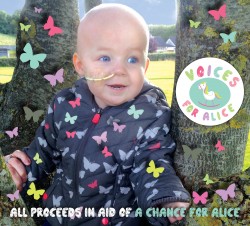 ”The album was released on Saturday November 1st 2014 and the album is available to buy at CD World Drogheda Town Centre, Xtra-vision/HMV Drogheda and online from both iTunes https://itunes.apple.com/ie/album/voices-for-alice/id929747132 and CD Baby where you can order the physical cd or download the tracks http://www.cdbaby.com/cd/voicesforalice “We will also be in The Laurence Town Centre and Scotch Hall every weekend from the end of November leading up to Christmas so if you’re looking for a great stocking filler we’ve got a real treat for you”, continued Matthew.

The lead song from the album is called Wishing Well by The Enemies featuring Katy Anna Mohan. The creative Ciaran McCabe and Dean Caldicott have produced an amazing video for the song which is shown above. The launch night for the album took place in McPhails bar,

Commenting on the album, Campaign Chair and another uncle of baby Alice, Cormac Bohan, said “I would just like to congratulate Matthew and everybody involved in creating this album in every area from the music itself, to the album production to the graphic design, for their hard work. It is a fantastic achievement for the local musical community in artistic and logistical terms. It is a wonderful snap-shot in time of our local musical talent and I hope that it takes pride of place in the music collections of people locally and beyond. It is very rare that a sample of local musical talent like this gets pulled together in such a professional way leading to such a brilliantly produced and quality end product in aid of a great cause.” 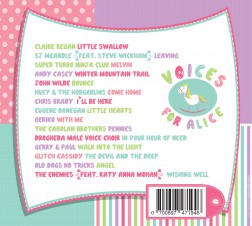 Concluding Matthew Turner said “I’d like to thank everyone who helped make this album possible. Everyone involved has gone beyond the call of duty, and on behalf of everyone at A Chance for Alice we are eternally grateful for all your efforts and hard work”.

Download the album or individual songs from iTunes https://itunes.apple.com/ie/album/voices-for-alice/id929747132 and download or order the physical cd from CD Baby http://www.cdbaby.com/cd/voicesforalice . The CD is also available to buy in CD World and HMV/Xtra Vision Drogheda and the A Chance for Alice team will be in both the Scotch Hall Centre and the Laurence’s Town Centre in Drogheda.