Are you eclipse-ready? Irish skies to darken tomorrow morning, but don’t stare at the sun – TheLiberal.ie – Our News, Your Views 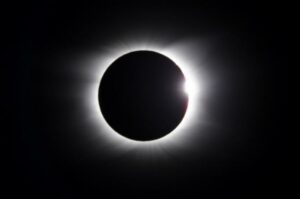 For about two hours tomorrow morning, starting at around 8:30, an unnatural twilight will descend upon the land as the Moon’s orbit drives Earth’s satellite in front of the sun, obscuring up to 95% of it. It will become noticeably cooler during that period of time, too.

But whatever you do, don’t stare directly at the sun, as even one minute can result in eyesight damage.

The event will be best and safest viewed through special glasses, a telescope, or reflected on a surface.

People in Ireland will see a near-total solar event. Those living in the most northern latitudes, like Iceland or Greenland, will witness a total eclipse.

Enjoy the celestial show tomorrow, as the next solar eclipse one won’t come around until 2026.