Shooting at a Sweden restaurant leaves two dead and several injured – TheLiberal.ie – Our News, Your Views 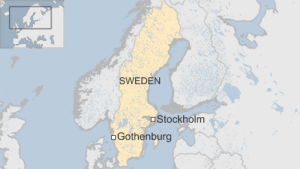 Two men were pronounced dead, whilst several others injured in a shooting at a restaurant in the south-western city of Gothenburg, Wednesday evening.

The two men who died were between 20 and 25, police said.

Police have no details on any suspects but have brought some in for questioning. In a statement the police announced that an automatic weapon is believed to have been used in the shooting

The shooting happened in Sweden’s second largest city,  the Biskopsgarden suburb of Goteborg, which was an area known to have a history of gang violence, said police spokeswoman Ulla Brehm. She said it was too early to speculate on the motive, but there were indications that the shooting was gang-related however ruled out a terrorist attack.

“There is absolutely nothing that indicates terrorism,”

She continues that at least two people were killed at the scene and several others taken to a hospital.

“I didn’t have a chance to think about what happened. Then I saw that my friend was bleeding. I tried to stop the bleeding as well as I could with my hand,” said the witness, who did not give his name.