‘Bin the (water) bills’ campaign faces a challenge; too few people have actually received their bill – TheLiberal.ie – Our News, Your Views 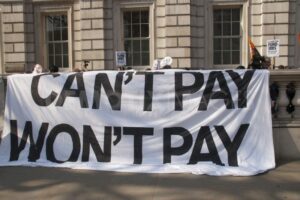 The Irish Water merry go round just keeps on spinning.

In a rather unexpected twist, the organizers of the next major protest against Irish Water have run into a snag.

They have been asking people to bring their water bills to the Garden of Remembrance in Dublin, and bin them.

Problem is, only a few people have actually got the bill yet.

She said “On Saturday, we may have to have mock bills, so people can practice what they’ll do when the real bill does come. Most people haven’t received their bills. It has been very, very slow, certainly in the Dublin West area.”

Saturday’s protest will kick off in the Garden of Remembrance at 2pm.