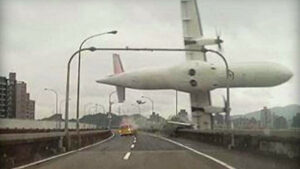 Flight GE235, a twin-engined ATR 72-600 turboprop model, took off from Taipei just before 11:00am local time, on its way to the island of Kinmen, carrying 53 passengers and five crew on board.

The aircraft got into difficulties shortly afterwards, and initial reports suggested that it hit a motorway overpass before crashing down into the Keelung river, some three miles from the airport.

There are conflicting reports as to the number of fatalities, with some sources quoting 12 and others 15.

The cause of the crash is unknown at this point. It is understood that the aircraft attempted to turn back to the airport before crashing. The plane remained airborne for less than three minutes.

This is TransAsia’s second disaster in just under a year. Last July, 48 people died and 10 were injured when Flight GE222 crashed during a rainstorm.