ESB and Vodafone announce fibre broadband plans for Cavan and other towns – TheLiberal.ie – Our News, Your Views 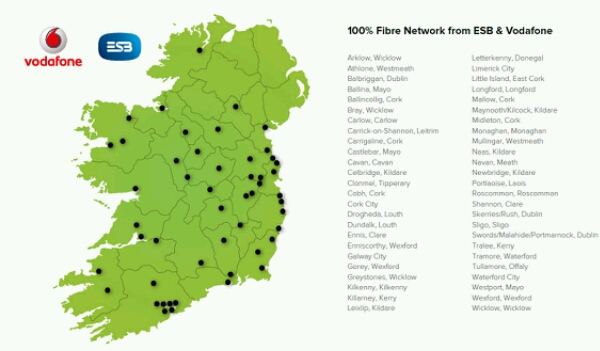 There was good news for those wishing to avail of faster  broadband in towns today as Vodafone and the ESB have announced a plan for fibre broadband service which is scheduled to be introduced to Cavan town soon.

Both companies say that the super fast service will be introduced to other regional towns later this year. The new service, will apparently pipe superfast fibre broadband into local homes and businesses across the country, it is expected that the roll out will commence this Autumn. Chief Executive of the currently unnamed new company Sean Atkinson said: “We will be delivering speeds of 1,000 megabits per second, which is in excess of anything you can get anywhere at present.” “We’re going to be rolling out to 50 of the largest towns outside cities around the country in phase one. €450m has already been approved by Vodafone and the ESB for this project, which will reach 500,000 homes and businesses.”

Mr Atkinson also said that pricing for new the service will be announced in due course. The new service will run its fibre broadband cabling along overhead and underground electricity lines. Mr Atkinson claims that completion of the first phase which is understood to be 500,000 homes and businesses will happen by 2018.
Once phase one is completed, Mr Atkinson claims that a further 300,000 homes and businesses will be targeted.

Although Mr Atkinson says the current plan is only to have the fibre service in large towns and will not reach rural areas.