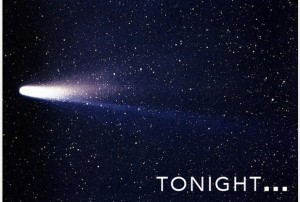 If it’s on your 2015 bucket list to spend a night under the stars, tonight should be your night as a 150 ft-long asteroid is set to skim past the earth in what Nasa have said to be the ‘closest near miss on records to date’.

Fear not though as the asteroid will not come close enough to hit the earth and will be approximately 1.2million km away. Which in theory is our distance from the moon, three times over but a ‘close save’ in astronomical terms. The asteroid is said to be HUGE! twice the size of a cruise ship.

The asteroid will be closest to the earth (particularly Ireland) at around 4:20pm, but may not be visible as its daytime hours but we should be able to catch a glimpse as the nighttime approaches. It should be easily visible from 8pm, and continue onto the early hours of the morning. It will be reaching it’s peak at 4:30am as it grows higher into the sky.

The asteroid is said to be visibly seen with a naked eye, but binoculars would be a plus. It’s said to be moving in the opposite direction of the stars so relatively easy to spot, if the night sky remains clear.