Regulars at the Dakota bar in Dublin were at the hands of celebrity barman recently as star of the US smash hit tv series Scrubs, John C McGinley stopped by to show off his bar skills by pulling pints of Guinness for the locals.

The actor who is best known for starring opposite to Zach Braff (JD) as the mean spirited Dr Perry Cox on the hit comedy series apparently served regulars for up to an hour on Wednesday night. McGinley who is of Irish descent was mainly unnoticed by most punters as he was dressed down in a baseball cap and jacket, However this did not stop the staff at the South William Street pub putting the honorary member of the UCD law society to work behind the bar.

The Dakota bar took to their Facebook page recently to tell of how McGinley got on saying: “he lasted about an hour…we were having difficulty getting him to charge the customers lol.”  McGinley himself then took Twitter to say that he was enjoying his stay in Dublin and claimed that the nations capital was the best city in the world. 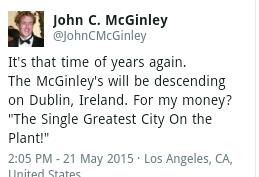