Journalists Attacked During Baltimore riots – TheLiberal.ie – Our News, Your Views 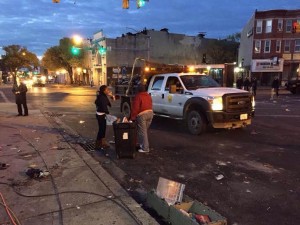 At least eight journalists have now been attacked and beaten during the recent attacks in Baltimore this week.

Several journalists alone were attacked last night after trying to report on the attacks.

A Baltimore Sun photo editor was amongst the victims while taking photos of the riot.

As well as that attack, a CNN journalist was also attacked tonight while live-streaming video coverage. Resulting in a split lip and a broken camera.

“In a flash, one of them bumped into me and grabbed the phone out of my hand. I chased after him, screaming, and other protesters knocked into me, tripped me and shoved me to the ground. They circled around me, some with bricks or rocks or bottles in their hands.

But one boy pushed through the crowd and pulled me up, another came to my other side.

“We’ll get your phone back, come over here,” he said, pulling me away from the knot of teens and toward some other journalists, one of whom had a bloody scrape on his head.”