Massive haul of drugs, cash, and cars seized in County Antrim – TheLiberal.ie – Our News, Your Views 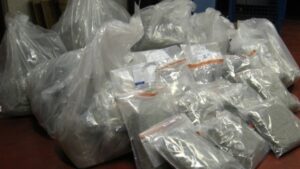 Police in Northern Ireland made the discovery at a ‘cocaine factory’ in Antrim.

The haul was found during searches in Newtownabbey on Wednesday and Thursday.

A man and woman, both in their early 30s, were charged with drug offences. They are due to appear at Belfast Magistrates Court this morning.

Along with the drugs, a number of mobile phones, an imitation firearm, drug paraphernalia, and three high-end cars were seized.