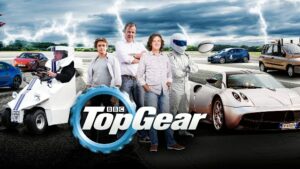 So the long awaited premiere starts this weekend, the most watched car show in the world starts on Sunday at 8pm on BBC 2 and BBC 2 HD.

The recent trailers leading to the launch have been very low on excitement but the recent extended trailer released yesterday show snippets of an action packed series including their usual antics of racing across a continent, looks like Asia this time with a trip through Burma and Thailand in brightly coloured trucks.

The teaser also shows test driving the new Alfa Romeo 4C, the Mercedes-Benz G63 AMG 6X6, a Caterham, a tank, the McClaren P1 hypercar and Jeremy racing around and smashing a supermarket.

A rumoured trip to the V-8 supercar series in Austrailia can surely lead to their infamous mischief.

As usual The Stig will be putting in blistering laps and many stars in the Reasonably Priced Cars showing off their skills to get to the top of the leader board, including Hugh Bonneville from Downton Abbey and Sherlock star Benedict Cumberbatch.

The Season is ending with their annual Christmas Special in March as confirmed by Jeremy Clarkson on twitter.

Love it or hate it with it’s predictability but I know it’s not number 1 for no reason.