Trending on the web: 30th January – TheLiberal.ie – Our News, Your Views 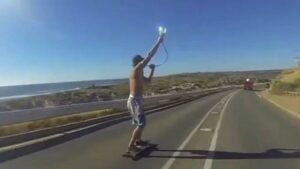 From neck nominations to the Golden globes, Justin Bieber getting arrested and Vin diesel dancing to Beyonce, here is some of the latest light hearted viral videos and memes that have been clogging up your news feed.

1.#neck nominations Of course The neck nominations have to come at the top of the list. This time last year the harlem shake emerged. Now it’s time for another viral phenomenon that everyone can partake in, bringing their own imaginations to the table. However this time it may involve drinking raw eggs, dog food, the occasional splash of urine and also biting the head off chickens.

The trend originates in our second home Australia, and of course it became an instant hit when it involves one of our favorite pass times. A youtube channel best neck nominations has already been created in dedication to the new trend. The viral chain dare involves attempting to chug a drink in one go. Once you get nominated online you must complete the dare in twenty four hours or partake in a forfeit. Once you accomplish the dare however, you now get the chance to tag two unsuspecting victims to suffer the same viral fate. Others however have taken the necking to new heights… Like the gentleman in this video;

2.#velociraptor You really can buy nearly anything on ebay. This statement was proven true recently when a Velociraptor cage went up for auction on the website. The cage is in fact a genuine prop from the 1993 dinosaur hit “ Jurassic park”. The cage even includes a velociraptor inside (it’s a prop obviously) however the cage has accumulated an outstanding bid of nearly $100,000.

3.#Grammys- It’s the event of the year in celebville and every year it generates a plethora of viral trends. Here the three most popular are featured.

#Best selfie ever: After Ant and Decs stunt last week, award ceremony selfies is a new massive hit among elitists. Hats off to this web user who took a Selfie of themselves among the Grammy audience.. In a reflection.. in Daft punks helmet.

#PharellsHAT: Many people have asked the baffling question; why did Pharell choose to wear a hat, three times the size of his head to the Grammys? Was it a publicity stunt? If so it worked because countless posts and memes have been produced online in response to the wardrobe malfunction. Pharrel even created a parody video “Hatty”. The story is trending on Twitter as #pharrellsHAT, however users have been reminded not to type the two words in the same sized case.

#Taylorswift And lastly there is the clip of the heart wrenching moment that Taylor Swift mistakenly thought that she had won a Grammy.

4.#Free Bieber: Like so many young stars, Justin Bieber has gone and got himself into the spotlight for the wrong reasons… again. But like many say, there is no such thing as bad publicity. While some expressed outrage, many beliebers stuck by him earlier this week when he was arrested for driving under the influence.  #FreeBieber has been trending on twitter, at least it is a lot less worrying than a previous trend of #cutforbieber.

5.# Queen B. Lorde has been taking a slashing from Beyonce fans with this comical meme and play on words.

6.#monster Dubbing is general hilarious, regardless of the content. And this video of Monster (Eminem and Beyonce) being sang in the tone of family guy characters is no exception when it has received 50,000 views in less than two days.  The most fascinating thing about the video however is that it is all done by one person, Mikey Bolts.

7.#Gatesletter It is only apt that Bill Gates would be attempting to go viral. His aims were to create a viral video in order to promote the webpage for his charity “The Gates foundation”. He enlisted the help of US comedian Jimmy Fallon, and this was the outcome…

9.#foodie What would be your dream job? Do you enjoy eating? would you consider yourself a foodie? Well, this woman in South Korea may very well be living the dream. She makes an estimated 9,000 dollars a day for eating food in front of her webcam.

10.#uniform Whether you are a fan of snow sports or whether you even intended on watching the 2014 winter olympics, Mexico have announced their uniform for the games which may lead to a sudden change of heart.