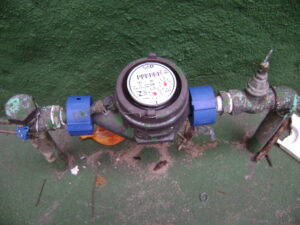 Facebook pages have been set up, advertising this illegal activity.

They have called themselves the “Anti-Water Meter Fairies” and photos have surfaced of removed water meters in the Dublin Area.

A group said to be from Lusk, Balbriggan and Skeeries have been continously uploading photos and videos displaying the removal of water meters.

In one particular video from the “Balbriggan, Lusk, Rush and Skerries Meter Fairies” Facebook page, an unindentified man is seen standing with two removed meters, “a message to Minister Alan Kelly”.

The people in the photos are seen to be wearing masks or balaclavas.

In the video, the man seizes a sledgehammer and smashes the two water meters until they are in pieces.

A group in Dublin South say they are carrying out removal requests around Ballinteer, Dundrum, Sandyford and Rathfarnham.

Facebook pages in Mullingar, Carlow, Navan and Offaly have surfaced, claiming also to be “meter fairies”.

A spokeperson from Irish Water stated “Under the Water Services Act 2007 it is a criminal offence for a person to remove, damage or impair the proper working of a meter. A person who is convicted of such an offence is liable to a fine of up to €5,000, or imprisonment for a term of up to three months, or both.”