Beagle 2 spacecraft spotted on Mars’ surface 12 years after its dissapearance – TheLiberal.ie – Our News, Your Views 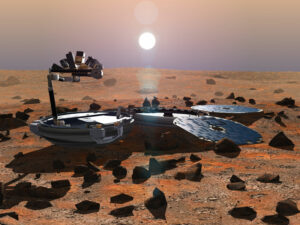 The craft was spotted in the surface of the Red Planet by scientists operating the HiRise camera on NASA’s Mars Reconnaissance Orbiter (MRO). It appears that it landed about 5km from its its originally intended touchdown site in the Isidis Planitia basin.

Images obtained show that Beagle 2’s solar panels failed to open, thus the radio antenna was never able to deploy. As a result of this, the craft could not communicate with Earth. There also appears to be some structural damage. Scientists believe that an unlucky bounce on landing may have caused some parts to become out of shape.

It was always believed that the probe was destroyed on impact when its parachute and airbags did not deploy as planned.