Careless act as Irish Water send letter to a man who died six years ago – TheLiberal.ie – Our News, Your Views 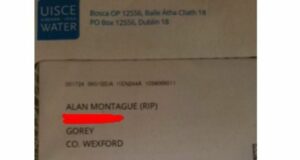 We may all be dreading the upcoming water charges coming in the letterbox over the next few weeks, but for one woman receiving the charges caused a great deal of distress after Irish Water sent a bill addressed to her husband who died nearly six years ago.

The women and rather unsuspecting victim Ms Jessica Montague from Co Wexford told her heartbreaking story to The Irish Times recently after she received a bill from Irish Water which was addressed to her deceased husband, as “Tom Montague RIP.” Ms Montague was so upset and outraged at receiving the rather thoughtless letter she decided to post a photo of the letter along with a message on Facebook saying: “This morning’s post. Two letters from IW addressed to my deceased husband. Nearly 6 years dead and you dare to put that on a letter. No, I will not be contacting you to clarify your error”.

Ms Montague told the newspaper that her loving husband sadly died in June 2009, but Irish Water still sent a bill addressed to him along with another letter which requested that he clarify his current household details. Ms Montague said she was deeply upset and “shocked” that Irish Water carelessly addressed the letters to a dead person.

She told the paper: “I can appreciate someone making a clerical or database error, but someone had to input the data and put in the words RIP after my husband’s name. I don’t know why they would deliberately do that,” she said. Ms Montague also said that she originally posted the photo to her Facebook account so family and friends could see but she decided to share it publicly shortly afterwards.

The careless act received a great deal of response from other Facebook users, with several other people contacting Ms Montague saying she was not the only person to have been sent a letter from Irish Water to a deceased spouse or relative. Ms Montague went onto say: “I’m so perturbed as to why they sent it. It doesn’t make sense for a new utility to send a bill to someone who died several years ago,” she said.