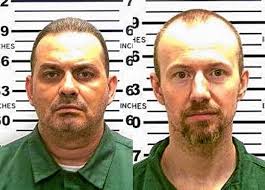 Two convicted murderers have successfully broken out of a maximum security prison in upstate New York.

In scenes reminiscing of The Shawshank Redemption and Escape from Alcatraz, inmates Richard Matt and David Sweat -both serving life sentences- fooled prison guards with dummies made out of sweatshirts and used power tools to drill holes out of their cells to access  the sewer system. They eventually gained freedom through an outside manhole.

This is the first successful breakout in Clinton Correctional Facility’s 150 years history.

According to officials, the men drilled a hole through the steel wall at the back of their cells and walked onto a catwalk. Then, they climbed down and used the tools to drill through a maze of pipes and tunnels, before emerging into the outside world through a manhole on a nearby street.

The men remain at large, and are considered dangerous so the public are advised not to approach them if seen.

It is not immediately clear how the escapees managed to obtain power tools and use them without arousing suspicion.