Dublin zoo rejoices at the birth of the endangered baby bongo. – TheLiberal.ie – Our News, Your Views 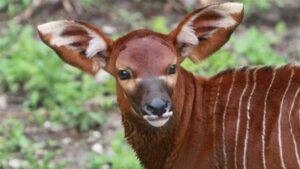 Bongos are an endangered species of antelope, known for its dramatic red coat with either black or white markings.

There are less than 200 left in the wild, due to the hunting of bongos for meat and habitat loss caused by excessive timber felling and bad farming practices.

These animals can only be found in Kenya.

The calf, weighing 20kg, was born to Nanyuki, a first time mother and its father Hodari.

For its own protection the calf will be kept from the public for sometime until the calf is old enough to deal with the public.

While the gender of the calf is still unknown, the keepers at Dublin zoo are thrilled with the arrival.

Team leader Helen Clarke- Bennett stated that they were ecstatic “to report that we have a fine, healthy bongo calf who is feeding well and has already been introduced to its father”.

“We don’t know the gender of the calf as yet but first-time mum Nanyuki is proving an excellent mother. She became pregnant on her first mating with Hodari and it’s great to see such a successful outcome.”

For more information on the animals in Dublin Zoo, the show “The Zoo” is returning to RTÉ One at 7pm on Thursdays.