Gay Marriage: Lacklustre Fine Gael launch – Taoiseach confirms he will not debate ‘No’ side – TheLiberal.ie – Our News, Your Views 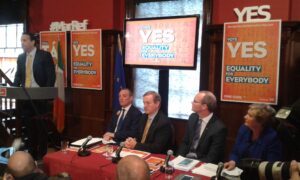 The Fine Gael party held a so-called ‘press conference’ in Dublin today, in theory to discuss the upcoming Same Sex Marriage referendum, and take questions from the media.

The Taoiseach and several other senior Cabinet members such as Simon Coveney, Leo Varadkar, and James Reilly among others were in attendance.

TheLiberal team was there, ready to ask the hard questions that needed to be asked.

The conference opened with speeches from selected individuals, with a blatant focus on evoking an emotional response, as opposed to explaining fair facts. While the people involved made commendable efforts to share their personal stories, there was a distinct lack of fairness and equality, as there were very one-sided tales of a personal nature.

The Taoiseach himself delivered a lengthy speech on how Ireland’s attitudes towards sexual orientation have changed, etc, always trying to push for a ‘Yes’ vote, thus fulfilling the party’s agenda.

Minister for Health Leo Varadkar also spoke briefly, and so did Simon Coveney.

When it came to Q&A time, it was announced that only three questions would be taken, and it soon became clear that these were carefully chosen and preordained, likely to prevent the Taoiseach from having to answer difficult questions.

Then, it was over, and the room started to vacate.

TheLiberal team persisted, however, as we had some tough questions we wanted to ask, one way or another. We did manage to speak to Simon Coveney, who became visibly flustered under questioning, and then the Taoiseach himself, who said the only difference between civil marriage and partnership is equality, cutting the answer rather short before his handlers ushered him away in a rather heavy handed manner.

From journalistic point of view, the event was more a series of speeches as opposed to an actual conference, as the media at large were not really given a chance to raise any issues.

It became starkly clear that Fine Gael did not want to answer any questions, but only to make their own views heard.