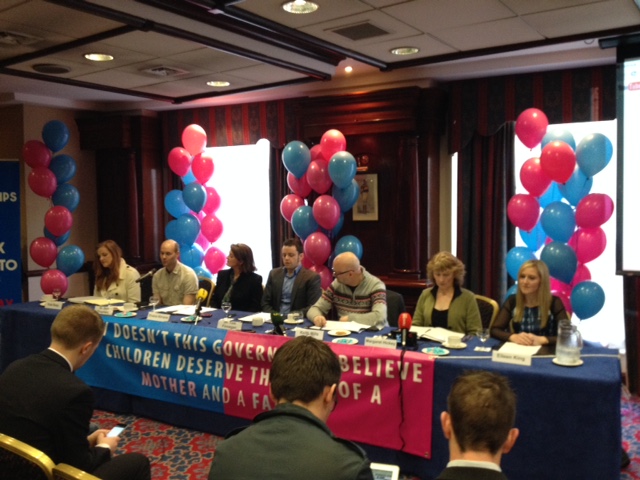 The group “Mothers and Fathers Matter”, which is campaigning for a No vote in the upcoming marriage referendum, formally launched its campaign today with a press conference in Dublin’s city centre.

The main banner at their top table read “Why doesn’t this government believe that children deserve a mother and father?” and this was the thrust of their argument throughout. 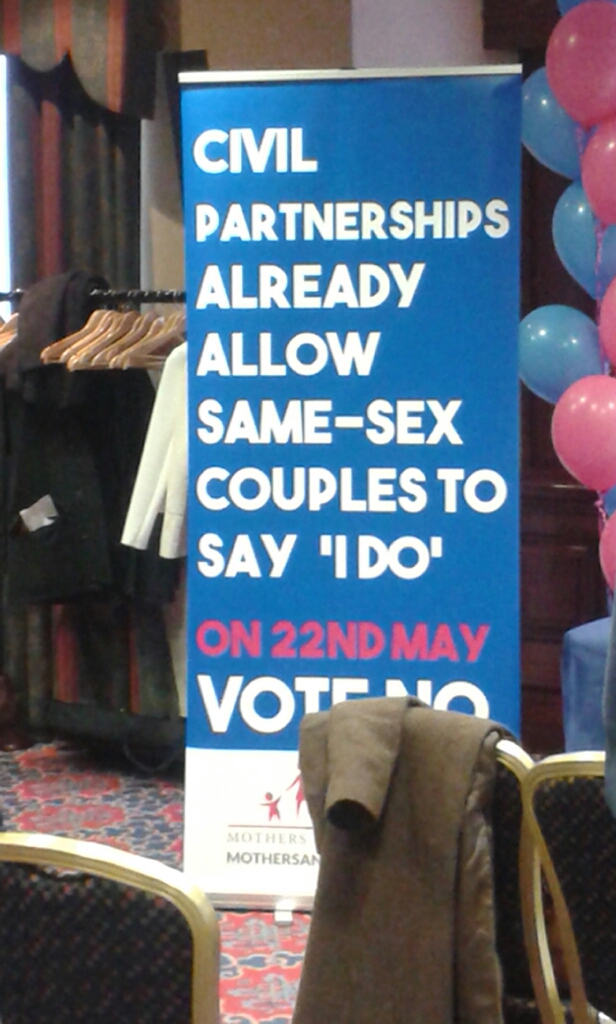 A wide variety of speakers from all walks of life have joined the group and spoke from the top table before welcoming questions from the assembled press.  The group’s Chairman Professor Ray Kinsella was unable to attend but a statement was read out by him referring to the fact that marriage is a union exclusively between a man and a woman.  He said that this is “unique and precious to society” and that it protects the fundamental right of a child to a mother and father, as reflected in the UN Declaration of Human Rights.

A number of other speakers attended the launch and spoke of their concerns,  including the following:

Keith Mills, who described himself as a gay man who has had relationships with both men and women and who recognises the differences between the two in terms of what children need. He also shot down the attempts by foreign multinationals to interfere in Irish politics, referring to the attempts by Twitter and other groups to promote a Yes vote on the grounds that it would be beneficial to the Irish economy. 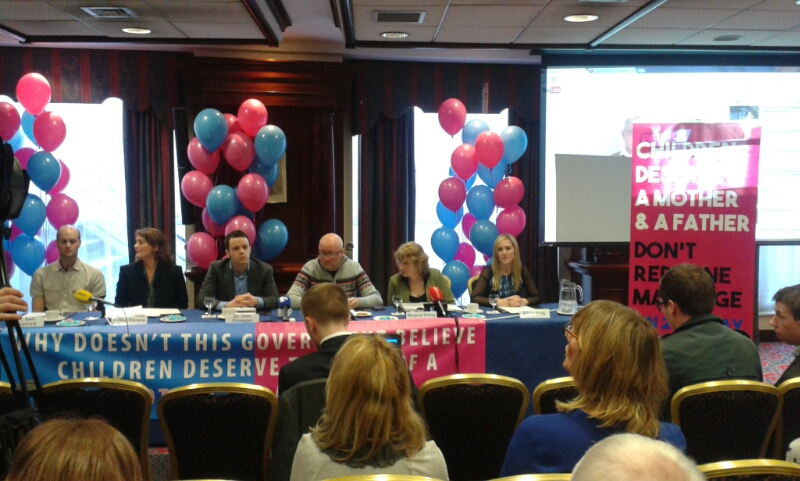 Mills was deeply critical of James Reilly’s recent comments where he accused No campaigners of using children as “pawns” in the referendum.

He described it as “bizarre” that Reilly, the Minister for Children, does not believe that children deserve a mother and father.  He noted that the politicians in Ireland have consistently used scaremongering in previous referenda, even saying in the past that the peace process in the North of Ireland would collapse if there was a No vote in the Lisbon referendum.  He also spoke about his disappointment about leading figures in the gay community, who have ignored the different views within the gay community and excluded him from the debate, claiming that all gay people in Ireland support a Yes vote, something that is clearly not the case. 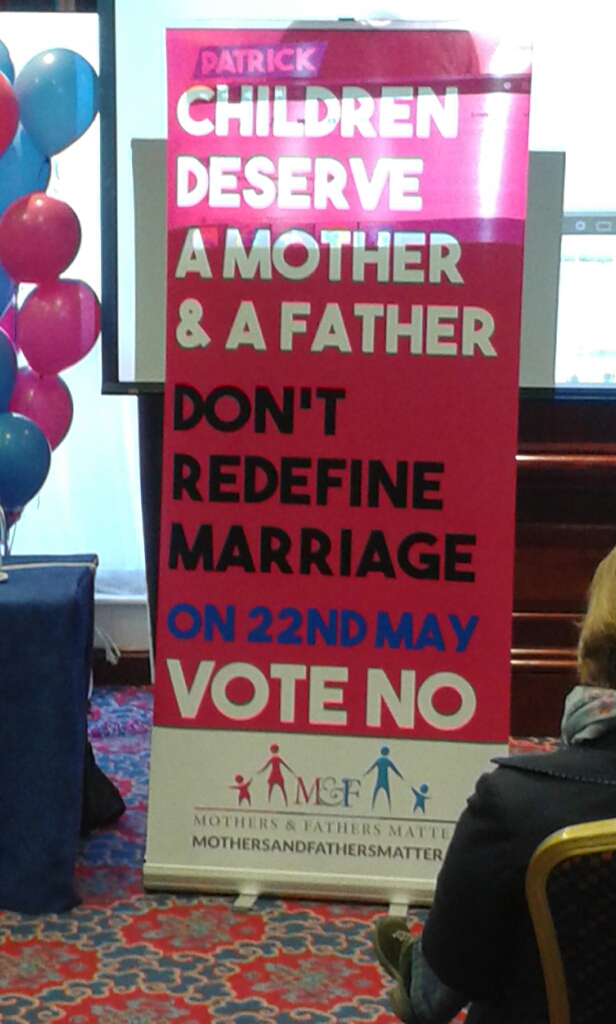 Dr. Tom Finegan spoke about the very real concerns surrounding the rights of children in this regard.  He said that there are several aspects to the rushed-through Children and Family Relationships Act which oppose the right of a child to a mother and father.

He said that if the referendum fails, it will be because voters want children to have the right to a mother and father.  He called on the Government to respect this fact if the referendum fails and said that they would then have to repeal some aspects of the Children and Family Relationships Act.  He mentioned that Mothers and Fathers Matter are currently considering taking a legal challenge against the CFR Act

Evana Boyle said she was a solicitor and mother of four children.  She has a special interest in human rights law.  She has concerns about the fact that children will be denied their right to a mother and father if the referendum passes.

Sam Shepherd is an ecologist.  He spoke about the fact that there is no difference in how gay people and straight people fall in love, but the fact remains that this does not affect the right of children to a father and mother. 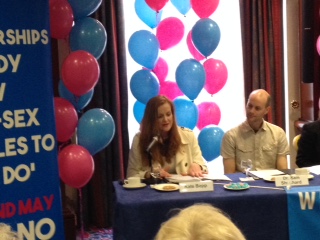 Kate Bopp is a mother of five children.  She spoke about the very complex and personal relationship between a mother and her child and the fact that an unborn baby will recognise his or her mother’s voice. This voice is very comforting to babies and she is very worried about the fact that the Government doesn’t want to address real concerns about surrogacy before polling day.

She said that her own mother was brought up by her grandmother, through circumstance but not design.  Despite the fact that she dearly loved her grandmother, she was devastated not to know her father, mother, and other relatives.  She noted that there is clearly a biological link here which is not being recognised by the Government and others who are pushing for a Yes vote and ignoring the rights of children in this regard. She cited Barack Obama who says children fare far better being brought up in a conventional family background. 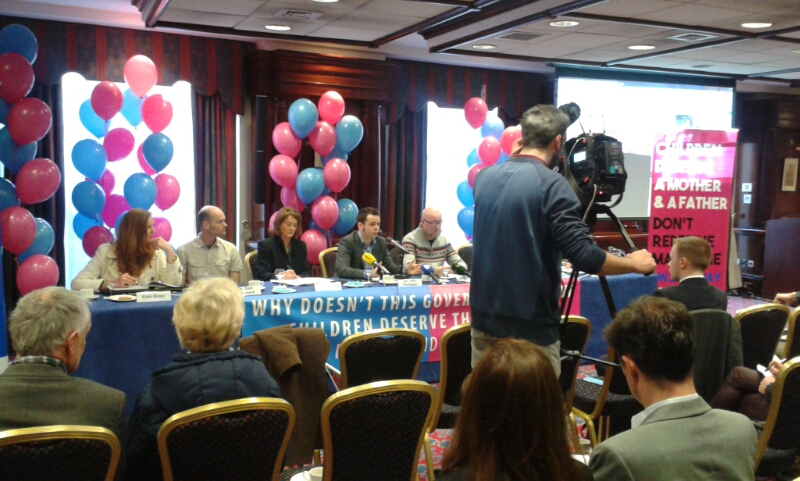 Margaret Hickey said she is a grandmother and has come on board with the No campaign largely because she is worried about the fact that the Government has refused to include a conscience clause in the referendum proposal.  She referred to cases that have happened in other countries, where people’s businesses have been destroyed because the law in their country no longer respects the democratic right of a citizen to decide not to carry out business for same-sex weddings if this conflicts with their religious beliefs. She expressed concern that this could happen to more and more business owners in Ireland if the referendum passes, and she referred to the Ashers bakery case as an example.

She also referred to comments made by the Minister for Health, Leo Varadkar, in 2010, when he said that he believed children deserve a mother and father.  She said that he appeared to have changed his mind, and it is not clear why, but there are many, many people in Ireland who have not changed their mind about this fundamental right of children.

Eileen King said that as a solicitor and citizen of the State, she has deep concerns about the rights of children to a mother and father being damaged by a Yes vote.  She said that this referendum is about children, not equality because citizens are already equal.  She pointed out that marriage has never been used as a measure of equality because if it was, it would mean that single parents were not equal.  Expanding on this, she said that equality stems from dignity, which is something inherent to everyone living in Ireland, regardless of whether they are married or not.

Keith Mills finished up by pointing out that if the referendum passes, a new level of inequality would be created.  Dr. Tom Finegan also pointed out that the it was ironic that the only time the Government have spoken positively about marriage in the last number of very difficult years was in the context of same-sex marriage.  They have done nothing to help married couples in terms of taxation policies, education or other means.  He called for the Government to make a more honest effort to assist married couples and protect the institution of marriage in the future, regardless of the outcome.

Now that the No campaign have held their launch, we can expect the campaign between the Yes and No sides to really take off in the weeks remaining before polling day.