Shocking: Man with learning disabilities attacked in a Dublin park – TheLiberal.ie – Our News, Your Views 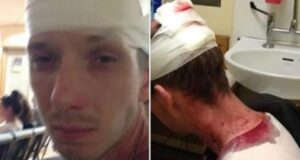 31-year-old man Paul Deaton, who has learning disabilities, was set upon by up to five male youths in a Dublin park on Wednesday last. The cowardly attack left him with head injuries, and was also told by his attackers that he would be set on fire. Paul ended up with four staples inserted into a serious head wound.

The assault has left Paul deeply traumatised. His family have expressed condemnation for this despicable attack on a vulnerable person.

According to a family member, the ordeal was recorded on a mobile phone by one of the assailants.

Lord Mayor of Dublin Christy Burke offered his sympathies and support to Mr Deaton and his family, and said that “the attack was deplorable, despicable and cowardly. I sincerely hope this is an isolated incident”.