Gay Marriage: “No” side once again comes out on top on tonight’s debate – TheLiberal.ie – Our News, Your Views 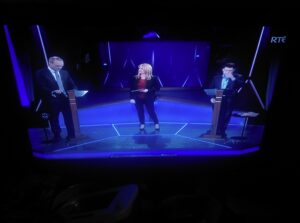 With eleven days to go to polling day, the Same Sex Referendum campaign is entering its final stages.

Fine Gael Minister for Agriculture, Food, and the Marine Simon Coveney, and Independent Senator Ronan Mullen both aired
their views on national television, and the “No” side, represented by Mr. Mullen, once again brought on a very strong case.

The program started off with two short films depicting views from both sides.

The first film portrayed a married gay couple, advocating for a “Yes” vote, explaining that they got married in Canada a
few years ago and found happiness together.

The second clip depicted a gay man, Paddy Manning, advocating a “No” vote, saying that there is no need to redefine
marriage to be happily coupled. He also highlighted the bullying that goes on, mostly inflicted by the “Yes” camp. He
strongly advocates for a “No” vote, indicating that children would lose out if the “Yes” side wins.

Then, there were some opinions given by supporters of both sides, among them a man who also spoke in the Fine Gael
conference attended by this journalist in Dublin recently.

Ronan Mullen then kicked off the debate.

He said he wants a society of love and respect for everyone, but insisted that a “Yes” outcome would amend the meaning
of family, and the definition of marriage itself.

Mr. Coveney retorted that issues around children and parenting will not change, and that the referendum would simply
extend access to marriage to two same sex people. But later on, members of the audience did highlight the fact that it has a lot to do with children, and they will certainly be affected. The minister insists that the referendum does not change the definition of marriage, it simply enables same sex couples to access such institution.

Mr. Mullen said that the minister was simply continuing the denial expressed by the Government when it came to children’s issues. He said that he wants the Government to respect all children equally, and that if the “Yes” side wins, same sex couples could challenge surrogacy issues.

He added that the “Yes” side wishes to change the rules about starting families, claiming that the Government never engaged with people hurt by surrogacy issues.

The “No” side once again fielded very valid arguments, and Mr. Coveney was pushed against the ropes, specially when it came to issues around surrogacy.