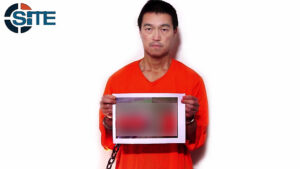 A new video released by the extremist organization ISIS today purports to show the cold-blooded execution of the second Japanese hostage, Kenji Goto.

The one-minute seven-seconds video begins with an English language speech given by ISIS’s executioner ‘Jihadi John’ to the Japanese people. The hostage, Goto, is seen kneeling before him, wearing an orange boiler suit.

The executioner holds a knife as he addresses the audience. Then, he puts the knife to the hostage’s throat, the video fades to black, and the next image appears to show the hostage’s decapitated body. It is unclear who, if anyone, performed the killing.

The footage has not yet been independently verified but it has all the hallmarks of authenticity.

The fate of the Jordanian pilot held by ISIS, Muath al-Kaseasbeh, is unclear at this point.

ISIS had demanded a prisoner swap in exchange for him. They asked for the release of Sajida al-Rishawi, an Iraqi citizen convicted for the 2005 Amman bombing that killed 38 people. She survived the bombing because her suicide explosive belt failed to detonate. If the swap was not forthcoming, ISIS had vowed to kill the pilot first, and then the Japanese hostage.