Nepal quake: Man pulled alive from rubble 82 hours after the disaster – TheLiberal.ie – Our News, Your Views 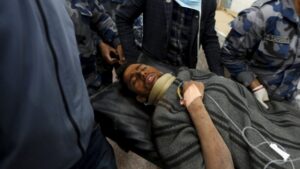 A man was miraculously pulled alive from the rubble more than three days after the worst seismic event in over 80 years devastated the region.

The man, who had become entombed under the ruins of a collapsed hotel, said he was forced to drink his own urine to survive.

Meanwhile, looting has been reported in the area, and more than 30 people have been arrested.

According to official figures, the death toll has now surpassed 5,000, and it’s likely to rise.

An international aid effort is underway to try and provide food and emergency supplies to the people affected by the event.