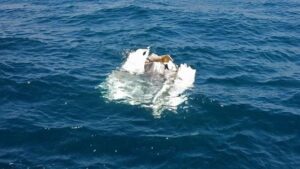 Sources for the Indonesian navy have confirmed that more than 40 bodies have so far been retrieved from the water around the area where AirAsia Flight QZ8501 disappeared from radar 48 hours ago.

The bodies have been moved onto an Indonesian rescue vessel. It has been confirmed that the bodies did not have life jackets on, which suggests people perished without warning at high altitude before they had the chance to put them on.

Relatives of passengers on the doomed flight broke down in tears at the images broadcast by some Indonesian stations. Broadcasting authorities later apologized for showing such images.

Flight QZ8501, an Airbus A320-200 with 162 people on board, was en route to Singapore when it vanished. The crew’s last transmission was to request a change of altitude to avoid severe thunderstorms. The request was turned down due to other aircraft flying above them, but they received permission to veer left. All contact with the plane was lost soon afterwards.

The wreckage is now thought to be resting on the seabed in the Java Sea. Water depth in the area is about 40m, which should make the task of finding the aircraft’s flight data recorder a little easier.