183 sentenced to death in one ruling as Egypt cracks down on “Muslim Brotherhood” – TheLiberal.ie – Our News, Your Views 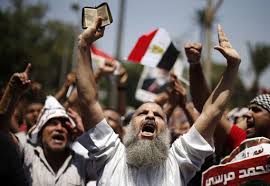 A court in Egypt has handed the death sentences to 183 people who it states are supporters of an illegal Islamist group.  The 183 are charged in relation to the killing of 16 police officers in the town of Kardasa in 2013.  34 of those sentenced were not present at the court.  Charges against two other defendants were dropped when the courts discovered they were both dead.

The killings were a part of the events and turmoil that came about during the political overthrow which lead to armed forces ousting former Egyptian president and Islamist Mohamed Morsi, who was the country’s first democratically elected president.

Since the removal of Mohamed Morsi Egypt has staged its toughest opposition in history against the “Muslim Brotherhood”. The brotherhood has stated that its only purpose is in “peaceful activism”. In mass court trials thousands of supporters of the “Muslim Brotherhood ” have been tried for their support of an outlawed group.  These arrests and trials are being widely questioned and criticised by human rights groups across the globe.