Raging bridezillas or simply seeking justice? A dozen women storm bridal shop to claim dresses they had paid deposits for – TheLiberal.ie – Our News, Your Views 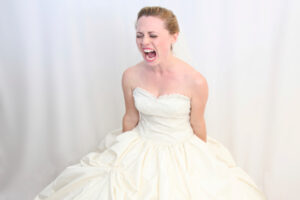 A (now closed down) bridal shop in Annacotty, Limerick, was the stage where a brides-to-be onslaught took place last Monday.

The enraged women gathered outside the shop and subsequently stormed the premises, rummaging through the stock, searching for what they claimed they had paid for.

The drama began some months earlier, when shop owner Shirley Flanagan took money from the women as deposit for dresses for their big day. However, when the goods were not forthcoming, the women grew suspicious, and after several fruitless attempts to contact Ms. Flanagan and subsequent complaints to the Gardai, things came to a head last Monday.

They rushed into Robelle Bridal shop and raided the premises in a righteous assault, simply taking what it was rightfully theirs.

Ms. Flanagan had previously been charged with fraud. Back in 2013, she had admitted taking money from five men under the pretence of issuing them with a valid motor insurance policy, but with the intent of making a gain for herself. All five men were employed in the taxi company owned by Ms. Flanagan’s father.The five drivers were employed in Flanagan’s father’s taxi company.