Ryanair aircraft forced to land shortly after take off due to burst tyre – TheLiberal.ie – Our News, Your Views 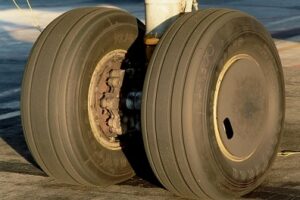 The 8.05am Dublin-bound flight from Edinburgh returned to the airport minutes after departing because of an undercarriage problem.

One of the aircraft’s tyres burst during the take off run, and though the plane did lift successfully off the runway, the crew decided to return to the airport. The flight landed back safely and taxied to a remote area of the airport until an engineer arrived.

A burst tyre in an aircraft may seem like an innocuous issue, but can have disastrous consequences. On July 25, 2000, Aer France Flight 4590, a Concorde flight, suffered a burst tyre on take off, initiating a chain of events that resulted in the catastrophic loss of the aircraft and all 109 passengers and crew onboard, plus four people on the ground.

The aircraft was past the point of no return at the time and was forced to take off. Tyre debris struck the underside of the aircraft’s port wing, creating shockwaves that ruptured one of the fuel tanks, sparking a fire and shutting down engine number two. The fire severed electrical cables, and thus the undercarriage could not be retracted, causing enormous drag.

The plane, though airborne, could not achieve enough speed. The intense heat from the fire began melting the port wing, and the loss of lift, along with the asymmetric thrust created by the loss of one of the engines, doomed the aircraft.