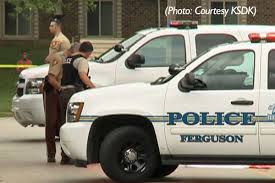 The St. Louis suburb that came to prominence over the police shooting of unarmed black teenager Michael Brown is back on the spotlight once again.

Mere hours after the resignation of police chief Thomas Jackson, two police officers were shot at. One was struck in the face, the other in the shoulder. Their injuries are understood to be serious.

Jackson’s resignation came after a damning Justice Department report that unveiled widespread and systemic discrimination against the black population by the Ferguson police and court system. Other high ranking officials have also resigned over such report.

The shooting of Michael Brown sparked massive protests, both in the mostly black suburb of Ferguson, and across the United States.

Darren Wilson, the officer who fired the fatal shots, was cleared of any wrongdoing.