A four month old baby was pulled from the rubble of a collapsed building in Nepal almost 24 hours after the earthquake hit last Saturday.

Images published by Katmandu Today showed the boy covered in dust being pulled to safety by members of the armed forces.

The boy has been identified as Sonit Awal. 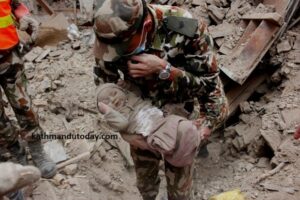 On Saturday, Sonit was at home in Muldhoka, Bhaktapur, east of the capital Kathmandu, when the 7.8-magnitude quake sent tremors through Nepal and bordering countries, according to the local newspaper.

Sonit’s father, Shyam Awal, desperately searched for his son amid the ruins of his home before calling the Nepalese Army.

A search began but was called off at midnight.

The army returned the next morning and at around 10 am they rescued the baby boy from the rubble after over 22 hours.

Sonit’s face was exposed during the whole ordeal, though a hooded top and shawl protected his head and body during the cold night spent under rubble.

The baby was taken to Bhaktapur Hospital and found to be uninjured.