Gay Marriage: Both sides ramp up their campaign for the final week – TheLiberal.ie – Our News, Your Views 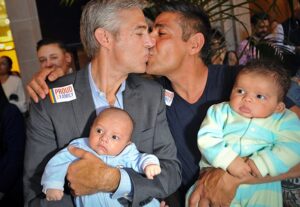 D-day for the same sex marriage referendum is approaching fast, and both sides are ramping up their efforts to swing voters their way.

Today, the “Yes” camp has received endorsement from Daniel O’Donnell. The crooner said that he did not necessarily feel that all children should have a mother and a father, and went on to explain how he grew up without a father, because his father passed away when he was very young.

He said “All of the people who know they’re talking about are telling us that it’s absolutely no difference who brings up the children, as love as they’re brought up in a loving environment.”

Responding to Daniel O’Donnell’s comments, Professor Casey of The Iona Institute said: “Daniel’s comments are obviously absolutely sincere and heartfelt. It is a good thing that Daniel is focussing on children in this debate.
“Children can, of course, lose a mother or a father through circumstance. It is tragic when a child’s parent dies. The remaining parent will almost always do a very fine job raising their children alone.
“But there is a world of difference between losing a parent through circumstance and by deliberate design. Unfortunately, if we vote in favour of this referendum the result will be that a certain number of children will be deliberately raised without a mother or a father from the very first day of their life with the full blessing of the State.”

Also, singer Bono has endorsed the “Yes” side. He has said that “Marriage is an idea that transcends religion.”

Bono, who descends from a mixed Anglican and Catholic family, also said “Marriage is owned by the people. They can decide. It is not a religious institution.”

At this point in time, the outcome of the referendum is far from clear. Many believe that the “Yes” campaign peaked too soon, and its energy is currently on a downward trend. The “No” campaign has gained a lot of traction in the past few days, and it’s gathering a lot of momentum.

According to sources, the “Yes” side are said to be quite concerned about a so-called “Silent No Vote”, which they believe is now starting to whisper quite strongly, rising from a previously restrained obscurity.

An interesting new development today is that various elements on the “No” side have strategically started to get their young supporters to contact their elder relatives to promise them they will vote “No”, cleverly mimicking similar efforts by the “Yes” campaign earlier this month.

The “No” campaign believes the tide has turned for them, and that their efforts in these last few days will pay off and get them across the finish line.

Though Taoiseach Enda Kenny recently proclaimed that he believes the referendum will pass by a slight majority, honest pundits are claiming that this referendum is too close to call, and that no one will know for sure one way or the other until Saturday week, as tables can turn in a matter of hours.

To conclude, Professor Casey said, also in response to Daniel O’Donnell’s comments, that: “We believe that when the Irish people reflect on this over the next week, they will decide to vote No.”