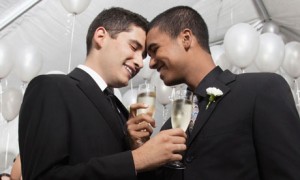 In the run-up to the referendum on same-sex marriage, The Liberal will be doing a Vox Pop each week on a main shopping street of a different regionally town throughout the country.

Last weekend, our reporter was in Dundrum in South Dublin. He asked 100 random people the following questions:

Question One:
What age are you and what way will you be voting in the upcoming marriage referendum?

Question Two:
What is the main reason you are voting that way?

On these figures in Dundrum, 56% would currently vote Yes whereas 44% would vote No. The younger participants tended to vote Yes whereas people from their mid 40’s onward swayed towards Yes.

The 25 to 4o age group saw the highest number of female Yes voters. They said they knew many gay people through their social scene and profession. They believed it was the right thing to do. No voters in this group claimed religious beliefs and an anti-government protest vote for their reasons to Voting No. Two men said they “believe marriage is between a man and a woman and that homosexuals have civil partnership already”.

The 40 – 50 age bracket said Yes voters believing society has changed since they were children.  No voters claimed to oppose gay marriage for child-based reasons. The most notable part of this Vox Pop was the fact that people in their mid 40’s were noticeable in their increase in a No vote.

The 50+ category saw a strong No vote on religious beliefs and not wanting to change the constitution in terms of marriage redefinition. Those voting Yes stated they had a gay relative or knew a gay person well.

It should be pointed out that over 70 people refused to engage and that the reasoning here is a summary of the general reasoning expressed.