Holding Out For A Hero – TheLiberal.ie – Our News, Your Views 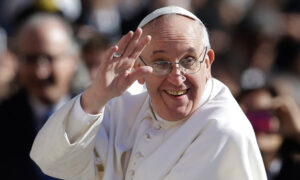 We’re obsessed with heroes, aren’t we?  From comic books to TV dramas to real-life escapades, there’s nothing like a tale of bravery to lift a dreary day.  Of course, unless the hero’s name is Batgirl or Superman, they mightn’t receive the accolade the deserve.

What a relief then, to see that TIME Magazine named Pope Francis as their Person Of The Year.  There was something fitting in the announcement, coming as it did at the end of a year when the former Cardinal Bergoglio had consistently found new ways of surprising the public.  From eschewing the grandeur of the papal apartments, to calling his old newspaper man personally to cancel his order, to washing the feet of the poor, Francis has surprised and delighted in equal measure.

His undeniable humility and down-to-earth manner have won him many fans.  Somehow, that same humility allows him at once to describe himself as “a sinner” while holding the highest office in the Church.  It’s not what we’re used to, and the public has, in the main, responded positively.

Of course, there have been detractors.  The TIME announcement wasn’t an automatic stamp of approval, they said.  It only recognises someone who’s made an effect on the world; it doesn’t make a comment on whether that effect was good or bad.  After all, Hitler and Stalin were both TIME People Of The Year in their time.  (That said, neither of them was particularly known for their kindness to the sick or poor.  Francis wins this round, I think).

There was an almost palpable sigh of dismay too when it became clear that the Pope might not be the herald of liberal thinking that many commentators seemed to have been hoping.  After some unscripted interviews with the Pope were dissected, it emerged that he wasn’t proclaiming a new era of church teaching on issues such as abortion at all – quite the opposite, in fact.  The core principles remained in place with an added emphasis on how to live the teaching.  (No doubt this came as a huge shock to groups like Catholics For Choice in the US.  For all of twenty-four hours, they must have felt all their Christmases had come at once.)

The thing is though, when such a flurry of excitement erupts at the mere potential of a change, you’d have to wonder what people expected from the TIME announcement, or indeed the Pope.  Did they think he would use it as an opportunity to announce drastic changes?  Of course not.  How could he?  What groups like Catholics For Choice don’t understand is that Church teaching doesn’t belong to the Pope.  The Papacy is a role of conservation as the beliefs that have protected humanity thus far are passed down from one generation to the next.

It makes you wonder too, at the whole idea of heroes, and what they’re made of.  The Pope is a man who stands by his principles.  In the months since he has taken over the role, he has lived those principles in the public eye and he hasn’t shirked in terms of living up to an appealing “what you see is what you get” personality, something which has drawn many back to an interest in a Church that would elect him as its leader.

In his very first address to the waiting crowds in St. Peter’s Square, the Pope managed the impossible – several minutes of silence while the masses below prayed in unison for the success of his papacy.

In terms of showing the world an example of a humble yet strong person, TIME may well have highlighted a true hero of modern times.