Stephen Hawking’s daughter Lucy has written an emotional letter to Katie Hopkins in which she pleads with the Big Brother star to stop bullying people with disabilities.

Lucy, who’s the daughter of wheelchair bound Stephen Hawking’s, called Katie out today via the Guardian  following her tweet about the Labour Party leader.

After the first televised Leaders Debate last month, she tweeted: “Ed, stop staring at me in my jim jams. It’s freaking me out.”

She also tweeted: “Ed, will you please quit looking down the barrel and talk to the audience or the questioner. Just plain weird.”

Before adding: “ED STOP LOOKING AT US. You are weird. Look at people not a machine. Try and act off the spectrum.”

45 year old Hawking’s whose son has autism, was not standing for it. 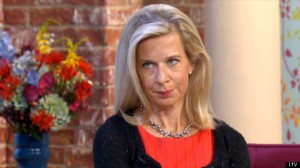 In response to Hopkins’ offensive tweets, she wrote said: “I have an autistic son. He’s very sweet, polite, hard-working, kind and generally lovely.

“But yes, he does stare at people from time to time. When we are on the tube, occasionally I have to say to a member of the public that my son is autistic and that I’m sorry he is staring. The reaction is always kind and compassionate.

“But if he were staring at you, I presume it wouldn’t be okay, that you would make a laughing stock out of him.

“You would use his disability against him – and you wouldn’t care how embarrassed, hurt or distressed he was. Because it wouldn’t matter to you.”

She added: “When someone with your public profile tells others that it’s okay to mock people with disabilities, you cause enormous damage.”

Stephen Hawking celebrated his 73rd birthday in January, beating all the odds for someone with MND.